The government has each year been increasing excise duty rate on non-petroleum products which include cigarettes,beer,soft drinks and water. This frequent increase of the excise duty on these products has adversely affected the demand of the products and thus fall of sales and profitability of the respective industries.  The Confederation has advocated for a predictable increase of the duty which the government has agreed to fix the exciseduty rate on non-petroleum products to the existing rate of inflation. The indexation of the excise duty rate to the rate of inflation will enable industries to plan effectively on their production volumes and hence increase sales.

Import Duty on Various products is governed by the East African Community Customs Managements Act of 2004. In accordance with this Act, the EAC Common External Tariffs are grouped into four bands. The first band is of raw materials which have not gone any  transformation and capital goods. This band attracts 0 percent  import duty. The second band is for intermediate products which are the  inputs that have gone substantial transformation. The import  duty of this band is 10 percent. Third band is of finished goods which are imported for final  consumption. The applicable tariff rate of this band is 25  percent. Sensitive products for the EAC region attract extra  rate over and above the rates under this band. The management of import duties is done through the EAC system, Tanzania alone cannot change the tariff until all EAC Partner states agree.

Income Tax in Tanzania include Pay As You Earn,CorporateTax and Property Tax. Currently, the income tax is governed by the Income Tax Act of 2004. The CorporateTax rate is 30 percent.  However, the companies which are listed with the Dar es Salaam Stock Exchange pay 25 percent. The PAYE rate is 11 percent. This is a progressive tax in the sense that if one’s salary increases, the PAYE rate also increases.

The Value Added Tax has replaced the sales tax and is governed by the VAT Act 2014. VAT is levied on all goods which have undergone some transformation.  Currently, the VAT rate is 18 percent and it is collected on behalf of the government by businesses whose annual turnover exceed TZS 100 million. However, all providers of services regardless of the annual turnover of TZS 100 million have to collect VAT on behalf of the government.

The levies and fees are charged by various central and local Governments for specific services which consumers enjoy. The levies and fee rates are several and differ from one institution to another. For many years CTI has been advocating for the rationalisation and harmonisation of these levies and fees so as to reduce cost of doing business in Tanzania. 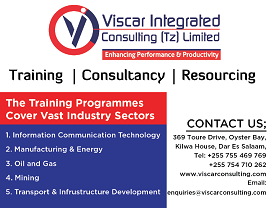