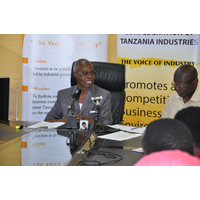 The Confederation of Tanzania Industries (CTI) has received the Budget estimates for the fiscal year 2018/2019 with delight and is optimistic of the fruitful implementation.

Speaking at the press conference in Dar es Salaam recently, the Chairman of CTI Dr Samuel Nyantahe said that most of the measures taken by the government during this year’s                           budget, if well implemented, would build an industrial economy that will in turn enhance employment and social welfare.

He said that, with the proposed measures, CTI believes the Government has paid attention to the many interventions and longtime recommendations from CTI and its members as                      well as other stakeholders.

“It’s our hope that the provisions highlighted in the budget will impact the manufacturing sector positively, specifically the manufacturers and producers of iron and steel products,

However, Dr. Nyantahe requested the Government to consider less restrictive measures on edible oil and industrial sugar products as the country seeks to emphasise on building                  the capacity to promote the sub-sector. He called for closer collaboration with key players in these sub-sectors so as to harness better results for the economy.

In general, we commend the Government for its effective tax administration measures that warranted the successful implementation of the budget 2017/18. In the year 2018/19 the government plans to collect TZS 32.47 trillion out of which TZS 20.46 trillion) equivalent to 63 percent of the budget) will be used partly to service the national debt, pay salaries and other recurrent expenditures. Development expenditure will be TZS 12 trillion equivalent to 37 percent to be used to meet the expenditure for the various infrastructure projects such as energy development, roads, railways, and ports.

CTI wishes to commend the government’s efforts that aim at increasing industrial production, improving the business environment and enabling the sector to contribute meaningfully towards economic growth, job creation and poverty alleviation. These include:

Reduction of Corporate Tax from 30% to 20% to 120 new investors in the pharmaceutical and leather industries for a period of 5 years.

Removal of sisal levy paid by firms that process sisal into fibers. This measure aims to promote value addition in sisal related products.

Introducing tax amnesty on interest and penalties by 100%. Through this measures taxes declared during the period of January to December, 2018 will have full remission of interest              and penalties. This measure aims to improve tax compliance and revenue collection.

2.1.7    Rates of various fees and charges by Ministries, Departments and Agencies (MDAs)

Despite the positive measures that were announced by the Minister for Finance, CTI wishes to call on the Government to extensively consult the private sector on the following                             proposed measures:

The Confederation is therefore committed to support the initiatives announced by the government to ensure achievement of the National Development Vision 2025 of Tanzania                         becoming a middle-income country through industrialisation.

On the other hand, the Confederation requests the Government to allow further consultations with key stakeholders to rectify the negative aspects of the budget as outlined herein,                  in order to facilitate a competitive business environment that is conducive for sound industrial development in the country.